Vision Zero originated in Sweden in the late 90s and one of the people at the heart of the implementation has been Matts-Åke Belin who last week presented 15 years of progress to the Vision Zero Symposium in New York, a city which has adopted Vision Zero principles earlier this year and this month has reduced the speed limit to 40kph (still too high).

Here are excerpts from an interview with Sarah Goodyear:

The largest resistance we got to the idea about Vision Zero was from those political economists that have built their whole career on cost-benefit analysis. For them it is very difficult to buy into “zero.” Because in their economic models, you have costs and benefits, and although they might not say it explicitly, the idea is that there is an optimum number of fatalities. A price that you have to pay for transport.

The other group that had trouble with Vision Zero was our friends, our expert friends. Because most of the people in the safety community had invested in the idea that safety work is about changing human behavior. Vision Zero says instead that people make mistakes, they have a certain tolerance for external violence, let’s create a system for the humans instead of trying to adjust the humans to the system.

Why should we put the whole responsibility on the individual road user, when we know they will talk on their phones, they will do lots of things that we might not be happy about?

In Vision Zero, the accident is not the major problem. The problem is that people get killed or seriously injured. And the reason that people get serious injuries is mainly because people have a certain threshold where we can tolerate external violence, kinetic energy. And we know quite well now how much violence we can tolerate.

Mistakes will happen all the time. In our societies now, we are so dependent on road transport, we need to allow almost everyone to use this technology. That brings it back to those of us who design the system: We need to design a system that supports these people so you don’t have catastrophic failure, i.e. KSIs

From the monstrous victim-blaming TfL Commissioner, Peter Hendy, to simpleton Councillors, like Phil Jones in Camden or Robert Benham in Havering, the people in charge of London roads have no clue on the principles of safe road design.

They are quick to blame victims or drivers, but refuse to learn the lessons from the killing fields.

Take the killing of Harry Keller & Colin Hicks in Romford last year. The couple was mowed down by a bus driver who ran a red light. The driver has been recently sentenced to 30 months in jail. For TfL and Havering Council, that is the end of the story: a rogue driver caused the death of two people.

Any intelligent person would ask: “Why did someone with twenty years of experience driving buses do such an evil act?” The prosecutor at the trial said:

The driver pulled out from a lay-by 12 metres from the pedestrian crossing that already had been red for two-and-a-half seconds, continued accelerating towards the crossing which remained red. [CCTV] footage shows he did not slow down. He carried on over the stop line and drove head on into and over both Mr Keller and Mr Hicks narrowly missing a third pedestrian. The defendant simply did not see, or if he did, he did not register, both the victims at the pedestrian crossing.

And the idiot Judge William Kennedy’s answer to why, was:

All those who drive: look in the mirror, tell me if you ever got to the end of the road and wondered what happened in the last 150 yards. Thank god in that 150 yards nothing dreadful happened. If anyone tells me that that’s never happened to them I will tell them I don’t believe them. A tragedy occurred inexplicable of proper decision.

i.e. “inexplicable behaviour” by the driver was the reason of the collision.

I often wonder if these people are just idiots or are so arrogant that they think we can just believe any idiocy that they say.

Dave Holladay, who is not an idiot, made these simple observations: 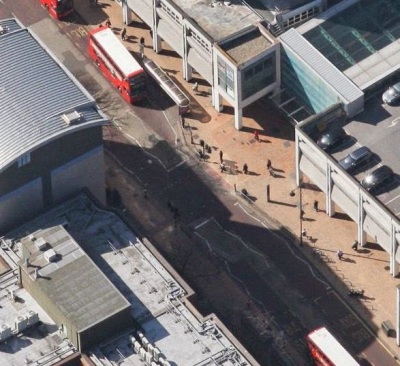 Suddenly we have a likely explanation of what happened; the “inexplicable behaviour” is simply due to the fact that bus drivers are tasked to look ahead for vulnerable pedestrians and at the same time look to the side mirror for oncoming traffic from behind. Most of the time, a human being can do it; but it is totally reasonable to expect an occasional failure, when a driver looks ahead, sees a green light and then spends too much time looking at the side mirror and fails to register that the light ahead has changed.
It is an error which should not be a death sentence for two people and a jail sentence for another.
The real error is designing what is basically a bus garage in the middle of a shopping centre, allowing vehicle to drive at 30mph and having conflicts of sight for drivers of buses.
Those are the errors which should be punished with jail sentences.
David Holladay makes these simple recommendations:
In the two years prior to the killing of Keller and Hicks, there were five other collision at that crossing and yet Cllr Robert Benham, cabinet member for StreetCare, denied road design played a part in the deaths.
He should be the one serving time; as Tom Kearney said: They got the wrong guy

Here is the speech by Tom Kearney:

I shouldn’t be here today.

When the ambulance pitched up 27 minutes after a 15 ton TfL bus hit me in the head & chest on Oxford Street, I had no pulse from the bleeding out of my ears and mouth and I wasn’t breathing through my two collapsed lungs.
The police had reported me as a fatal.
I shouldn’t be here today. This could have been my funeral too.
But I am just one of thousands here today protesting the lethal conditions for pedestrians and cyclists all across the United Kingdom.
But I am just one of thousands of people who’ve been hit by a vehicle on Europe’s Busiest Shopping Street since the new century began.
But I am just one of thousands of cyclists and pedestrians who’ve been killed or seriously-injured from a collision with a TfL bus since Boris Johnson became Chairman of Transport for London.
And I am just one of millions on this planet who’ve been killed or seriously-injured as a result of our species’ addiction to the motor vehicle in the past decade.
We are not alone today.
There are countless lives who we honour, remember and evoke today who can only be here in spirit.
Those who’ve already passed ahead of us…taken unjustly from the road on which we’re all travelling together.
We’ve lost fathers, mothers, sisters, brothers, sons, daughters, grandparents, friends and lovers.
People we loved or liked, knew or just knew of, respected or just spent a nice time with have become:
Unused numbers on our mobile phones that we can’t bear to delete
Empty places at the dinner table sadly noticed every day
or a visceral-but-fleeting memory evoked by a song, a smell, a photograph, or an anniversary.
And, having myself been taken to the end of road we’re all travelling on by an Oxford Street Bus five years ago at Christmastime, I found that my spirits only asked me:
“Why are you here? There’s so much more that needs to be done where we come from.
Remember us…because we’ll see each other again.
Remember us…by making it better”
And that’s the thought I woke up to when I emerged from my near death-coma in the new year.
Boris, you can’t ignore us. We’re not dead.
You can see us.
You can hear us.
You can remember us.
Stop the Killing.
Enough said.