London is a city based on Bullshit.

Londoners are always hyperbolic about their city, but the only world primacy that London can claim is as creator of bullshit.

Its biggest industries, finance, law, accountancy, government are based on bullshit.
Its Mayor is a master in bullshit, and Londoners love him for his audacity to emanate bullshit.
Its local politicians can only spew bullshit. Here are a few examples:
Transport for London tells us that they have adopted Vision Zero in the Road Safety Plan. Another stinking piece of bullshit, which echoes the bullshit that comes out whenever Leon “Safety is our No 1 Priority” Daniels opens his mouth.
This is the gyratory where Claire Hitier-Abadie was killed last week: 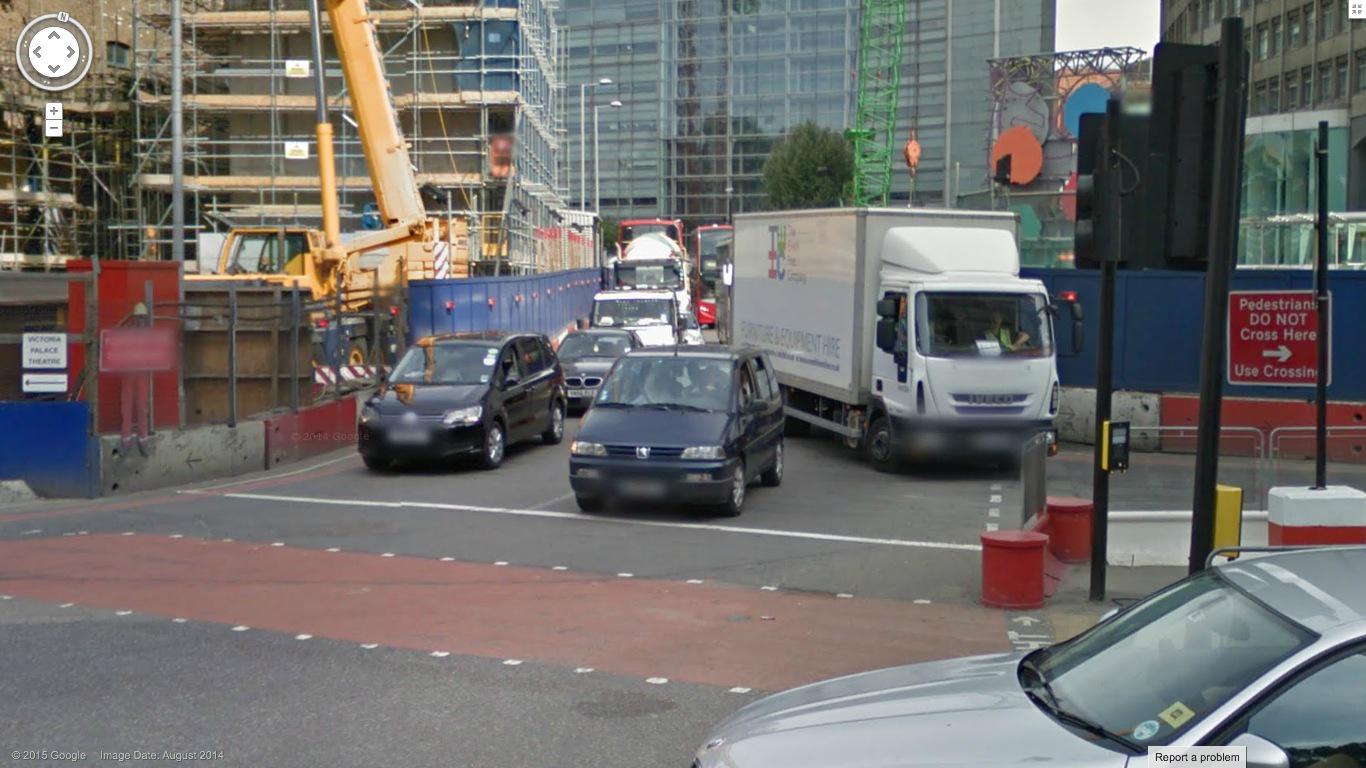 This is an environment where one small error by anyone can be fatal to someone riding a bicycle. This is NOT a Vision Zero environment.

Last but not least in this brief carousel of bullshitting officials is the Metropolitan Police, headed by someone who thinks that cycling is for poor people who cannot even afford a bus pass. These idiots are the greatest victim blamers in town, and whenever the massacre ratchets up, they briefly halt their  form-filling and hit the streets, giving tickets to the potential victims.

Londoners have become so good at this bullshit, that they fool a lot of people. Many Europeans come to London, enchanted by stories of opportunities and fair play; another bullshit. Nobody warns them that this is a city of callous and lazy people, where killing with a motor vehicle is an unpunished crime, where rules that protect pedestrians are conveniently forgotten, where bus managers push drivers to speed because their bonus depends on it, where the majority of HGVs are driven illegally, where major corporations lobby against road safety, where the Government is happy to see 5000+ people die prematurely from air pollution. In other words, a most unpleasant place
In the past month, at least* six Europeans have been killed by London drivers.

They all had come to chase a dream; but it is a mirage: this city is just full of bullshit; and my advice to all Europeans is: look for your dream elsewhere, there are plenty of European cities which treat their citizens with respect, which do not put commerce above safety, which, when faced with a problem, look for real solutions rather than blaming the victims.

The above is adapted  and updated from a speech I proposed to make at the vigil of Federica Baldassa; Stop Killing Cyclists, the organisers, did not allow it, because “it would [have been] a disaster for our positive relationship with the press.” More London bullshit.

* We say “at least” because the Metropolitan Police and Transport for London refuse to release timely information about the massacre of pedestrians in the capital. There may be other European pedestrians killed that we are not aware of.

Europeans are not the only victims of traffic violence in London. Here is the list of known victims so far this year.
In addition, tens of people have been severely injured, but no-one is keeping track nor drawing lessons, in spite of there being a legal duty on Local Authorities to do so, under Section 39 of the Road Traffic Act 1988. Yes, yet another piece of bullshit.

Here is the difference between Italian drivers and British drivers:

Most Italian drivers break the law. If they see a pedestrian crossing on a red light, they see her as a member of the community of road users and will take evasive action.

Most British drivers break the law. If they see a pedestrian crossing on a red light, they see her as a member of a different tribe and will run her down.

These are broad generalisations but they capture the deep hypocrisy of the British victim blaming culture. Because of their dysfunctional relationship with the law, people in the UK subconsciously feel guilty of breaking the law all the time when they drive, be it speeding, running red lights, not yielding to pedestrians when turning, etc.; but rather than saying “We are all doing it, so let’s take care of each other”, they project their guilt by blaming out-groups, people who are considered a different tribe, first among all, people who ride bicycles.

So when we hear John Armitt, a typical exponent of #nastybritain saying “the biggest danger to cyclists on the roads in London are actually themselves” we cannot help asking ourselves:

Just how many cyclists has john Armitt run over recently?

Armitt is chairman of the National Express coach group, so he is responsible for thousands of very dangerous vehicles. We know that one of his drivers almost killed someone exactly when he was making those moronic comments:

#tflboard told there has been a collision between a National Express coach and a cyclist at Marble Arch even as Board discuss the proposals.
— ibikelondon blog (@markbikeslondon) February 4, 2015

//platform.twitter.com/widgets.js
Just few hundred metres away another serious collision was caused by one of Armitt’s coaches in October last year:

So we will ask him: how many KSIs has he and his coaches caused in the past two years?

The other aspect of #nastybritain that contributes to road violence is greed. The other enemy of road safety that has emerged in the Crossrail for Bikes consultation is the Canary Wharf Group. Danny Williams brilliantly exposes the mendaciousness of this organisation who is willing to trade lives of ordinary citizens for profits, as it bargains with the Qataris to sell its assets.

UPDATE: We have written to National Express corporate offices three times and received no answer. We will take that that scumbag of Armitt knows that he is guilty and is afraid of letting the truth be told.

A couple of weeks ago, someone asked on Twitter whether it was OK to park on an advisory cycle lane, one with a broken line.

The Highway Code is quite clear. Rule 140 states:

However the response from Surrey Police was quite different:

No mention of “Do not park unless it is unavoidable”. On the contrary, the message is quite clear: “Go ahead and park there, we will not do anything to stop you”.
Why would anyone do something like that? Why would the Police advise people to endanger other people’s lives? I suspect there are three reasons:
1. Many cops don’t know the Highway Code
2. When there is a dispute between ordinary citizens and motorists, most cops side with the latter; in other words, the Police force is institutionally biased in favour of people who drive
3. This is yet another case of the peculiarly British disease of using absurd rules for not doing the right thing.
Let me explain the third point: sometimes we are faced with stupid rules, be it due to incompetent legislators or to senescence of the rule; in most places, including the UK, the absurd rule is either ignored or changed.
However, this country has mastered the art of using stupid rules as an excuse for not doing what is needed to be done.
Surrey Police is strictly correct, because apparently there is an omission in the Act relating to advisory cycle lanes and the Highway Code is unenforceable. But this is NOT an excuse for advising motorists to act in a way that endangers others. The obvious course of action is to stress what the Highway Code says, and if motorists object and persist in their dangerous behaviour because the Act is unclear, then the Police should put strong pressure on the legislators to amend the law.
Let me give you some other examples.
Taxi drivers probably suffer the most unhealthy working conditions of all Londoners: they sit all day behind other poisonous vehicles. I recently challenged some drivers in being more vocal in  favour of a rapid transition to electric vehicles; rather than campaigning for unsafe streets, they should put pressure on Transport for London to abide to EU air quality directives. With so many electric vehicles in the market, why don’t taxi drivers switch right now, instead of killing hundreds of people every year with their diesel emissions? Their response: “We cannot drive electric vehicles because none turns inside 7.62 metres”, a stupid 110 year old rule upheld by the Public Carriage Office. Really? Hundreds of people lose their lives because of such an idiocy? Or is it more likely that no-one really wants to change and do the right thing, so the rule is used as an excuse.
Zig zags at zebra crossings. This is a very good British idea and indeed the UK has probably one of the best record for motorists stopping at zebra crossings. The role of the zig zags is to ensure that an adequately large area around the zebra is visually uncluttered. The Regulations do go in some detail on how the zig zags should be painted, but they also state “where …the requirements of … these Regulations as to the placing of … road markings … to indicate the … controlled area [i.e. where the zig zags are] have not been complied with in every respect, … the controlled area shall nevertheless be treated as complying with these Regulations  if the non-compliance is not such as materially to affect the general appearance of the … controlled area”. This is excellent pragmatism of the legislator, who probably was well aware that British roads are not US grids. It means that allowances to the shape/size/placement of the zig zags are allowed as long as the general principle is maintained, that an area around the zebra is left clear.
In spite of this, I have heard numerous people saying that European style zebra crossings at road junctions are not possible in the UK because of the zig zag rule. Even our friend, As Easy As Riding a Bike got confused, stating that “zebra crossings will inevitably be displaced from desire lines. Unlike in the French and Swiss examples, where the crossing goes from corner to corner, UK zebras have to be set back from junction mouths.” That is not true and here is an example in central London:

A few years ago, BJ Cunningham, an entrepreneur, thought he had found a loophole in the legislation of European cigarette excise duties. At the EU Court of Justice, he received this verdict: “According to the law you are right, but the law was never meant for you to be right, so I am ruling against you”. We should never forget the intention of the legislators; if the regulations are defective or become obsolete, let’s amend them. It is perverse to adhere to defective rules and put people’s lives at risk.