Two recent court cases have shed light on a troubling issue that creates danger on London roads: HGV drivers changing their route out of their own will.

Here are the cases:

As reported, after dropping off his load near Elephant & Castle, HGV driver Edwin Humphries set his SatNav for the return journey to Telford. A few hundred metres later, Humphries decided to override the SatNav which was telling him to turn right at the junction. He felt that turning left would have been quicker (he had started work at 07:00, it was now 16:00 and still half of London and 250km separated him from his home). Problem was that he was on the wrong lane, one with an arrow pointing right. He probably spent the minute that the lights took to turn green debating “right or left”, finally decided to turn left and killed Abdelkhalak Lahyani who was riding to the left of the lorry, intending to go straight and probably did not notice the belated indicator.

One month earlier John Green loaded his skip lorry in Chancery Lane and started his trip back to Rainham in Essex. Below in green is the route that he was probably intending to take.

However at Holborn Circus, instead of turning left on Charterhouse Street to join Farringdown Road, he turned right into New Fetter Lane (red route). At the end of Fetter Lane, he turned left into Fleet Street and stopped at the Ludgate Circus junction. Here he realised that the right turn was prohibited. Not only that, there is a weight restrictions going forward to Saint Paul. 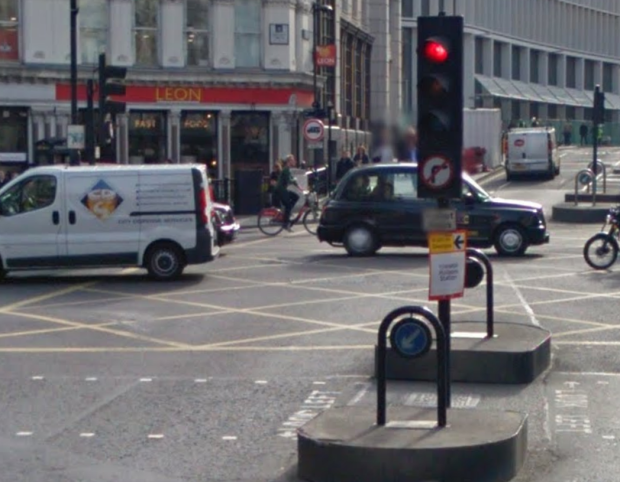 Green could only go left. He was probably upset of having to waste time and was probably remapping the journey in his head. The lights turned green and only then did he start indicating; by this time Victor Ben Rodriguez was riding on the cycle lane intending to go forward and was to the left of the lorry; Green turned and killed Ben Rodriguez.

In both cases the late decision by the lorry driver to change direction caused a fatality.

This is inadmissible. The routes of HGVs must be fixed before departure along well-defined risk-assessed routes. Drivers need to be alerted of risk factors as they are met, through their SatNavs. Under no circumstance should a driver be allowed to stray away from the planned route. If that does happen, the employer needs to be informed and the incident be logged.

The construction industry is (slowly) addressing the issue that the strict Health and Safety procedures in place inside a construction site are non -existent as soon as the lorry driver leaves the site. Contractors are required to follow prescribed routes, but there is no monitoring.

Recently I witnessed a cement lorry from Lafarge driving down a residential street, which could not have been part of the official route.

I reported it to the company, who after investigating the matter, interviewed the driver and following his attitude to the incident, decided to fire him. This is obviously positive, but

something that regrettably the Health and Safety Executive repeatedly has refused to do.

We hope that after reading this article the CICC will tackle with robustness the issue of enforcement of prescribed routes.

It is clear that any lorry over 7.5 tons (medium size) driving East on Fleet Street has to turn left at Ludgate Circus. However the great majority of cyclists do not know that.

This is a crash that was built in by design.

If Victor Ben-Rodriguez had known that the lorry had no other choice but turn left, he would have not been killed.

It is therefore imperative that a warning signal be placed before the junction warning cyclists that all lorries will be turning left.

This is the type of obvious measure that unfortunately London’s Transport Authorities never take, because they have not learned the Vision Zero principles.

UPDATE: Our recommendation is that all HGVs, not just construction ones, need to adhere to approved risk-assessed routes. It would also prevent silliness like this.

This Assembly notes the positive environmental and health effects of walking and wishes to see London become a safer city for pedestrians.

This Assembly notes the Mayor’s target to halve the number of people killed or seriously injured on London’s roads by 2020 compared to the Government base line of 3,627[2].
This Assembly believes that a target of 1,813 people, or fewer, being killed or seriously injured on London’s roads by 2020 is still too high.
This Assembly believes that the Mayor should adopt the Swedish Vision Zero approach to road danger, which incorporates five key principles:
This Assembly further notes than Vision Zero combines strong enforcement of traffic law and better roadway engineering with campaigns to discourage dangerous behaviour on roads. It also aims to raise the profile of traffic safety problems and help change cultural attitudes, which are too accepting of road death and injury.
This Assembly calls on the Mayor and TfL to take a bold approach to pedestrian safety. We need ambitious targets to drive forward progress on pedestrian safety, the political will to make difficult decisions, and clear leadership to build the momentum to change our roads and streets for the better. Adopting Vision Zero principles for London’s road safety policy could change public perception of road dangers as an inevitable part of modern city life. It would remind people that death and injury on our roads can be avoided if a serious effort is made to tackle the causes of the problem.

“London has always been a pedestrian friendly city, but it ought to be a safer city for those who chose to walk. Whilst the Mayor’s target to halve the number of people killed or seriously injured on our roads is welcome, it falls far short of what he should be aiming for.

An ambitious Vision Zero strategy, which vigorously enforces traffic law, improves road engineering, and works to discourage dangerous behaviour on the roads, is the only true route to boosting pedestrian safety. All the evidence points to regular walking as crucial to good health; the Mayor should be promoting walking as a way to tackle our obesity crisis and be doing more to make London a pedestrian friendly city.”

“We look forward to working with the Vision Zero campaign group to tackle systemic road danger and risk on our streets.”

“Reducing danger will make London into a more liveable city and save communities from the trauma of road death and serious injury.”