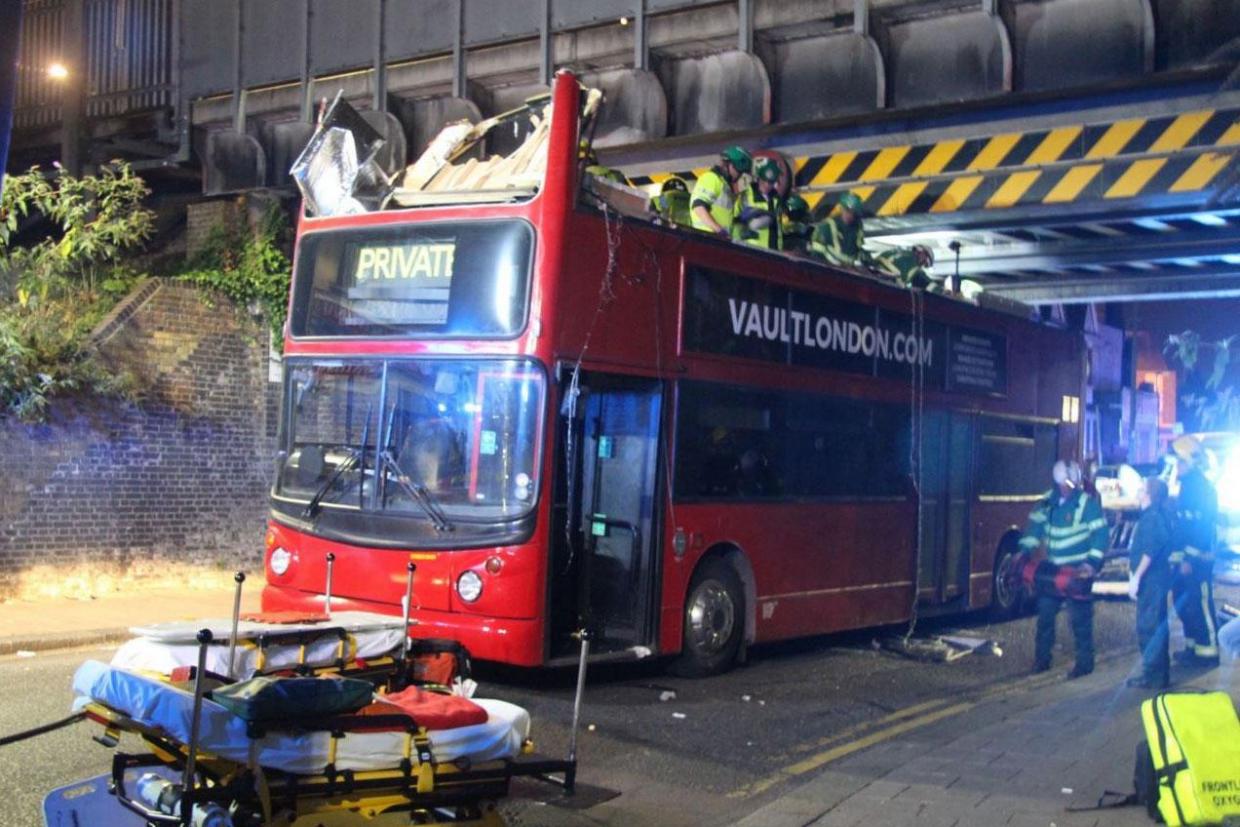 Last month, more than 20 people were injured after a bus crashed into a railway bridge in Tottenham. It was not an isolated incident. We welcome this guest post by Dave Halliday, independent transport safety investigator.

One key element of air and rail travel is that an incident, which has the potential of a far more serious outcome is investigated, and action taken BEFORE we have fatalities – or very serious injuries. Without any special effort I’ve noted 3 bus de-roofings in London – 2 in the past 20 days, 2 at the same bridge and 2 ‘party bus’ private charters. My memory runs back to West Street in Glasgow in 1994, when 3 died, after the driver of a chartered bus followed a car driver showing him the way through the city – that was 22 years ago and STILL we have buses running into bridges?

There are some key common factors in the recent London crashes. ALL are relatively small operators, and ALL were NOT operating on a registered service bus route, so TfL has no oversight of the routes being used, and the option of drivers making up the route as they go along increases the potential for taking the wrong turning. Almost unforgivable though was the rail replacement service not following a route that avoided hitting the bridge on the route where it was replacing trains. I know that road (I went to school in Isleworth) and it isn’t even on a direct route connecting the stations between Brentford and Hounslow!

The law requires Councils to investigate crashes and then take action to prevent future crashes (Section 39 RTA 1988) This detail should be readily available – published on-line – rather than something that has to be extracted by FoI reports, so that we can see learn from the mistakes made, and see that action is being taken to prevent the same crashes – twice (at least) in a year in just the 3 examples here.

With London’s substantial number of railway lines on viaducts and bridges there might even be an option (in the absence of an empowered National roads regulator) for TfL to require ALL double decker buses operating in London to have a proximity detection system fitted within a defined time limit, with the priority to equip vehicles not operated on registered bus routes. The detection system could incorporate an engine shut down and brake application (like the safety systems on trains) if a driver failed to acknowledge the warning and stop.

The planned system (promised – but with no timetable for delivery) for speed limiting on TfL’s contracted London Buses services can include the engine shut-down (and brake application) feature through a proven ‘beacon’ system, on the approaches to a low bridge. This sort of kit is already in use on buses and refuse trucks in Scotland (and elsewhere) – cutting the speeds on school grounds and waste processing sites.

22 years seems a long time over which no lessons have been learned – or action taken. How many close calls before the next fatal crash?

Earlier this week, Mark Treasure wrote insightfully how, at the core of many failures in building people-friendly road infrastructure is the propensity to ask the wrong questions.

This failure to ask the right questions, and come up with the right solutions, is epitomised not just by a focus on ‘education’ but also on what I would call ‘trinkets’ – things like helmets, lights, reflectives, clothing, and so on. In much the same way as with ‘education’, the process involves shifting responsibility onto the user, and ignoring basic environmental problems. Instead of examining why Road X is unsafe to walk along in dark clothing, we urge people to wear  reflectives. Instead of examining why pedestrians wearing ordinary clothes can’t negotiate the streets in your urban area safely, we hand out lights to them.

At a Conference in January 2017, TfL’s Leon Daniels will stress what he thinks are the key Sources of Road Danger

The five main sources of road danger in London are:
• Travelling too fast
• Becoming distracted
• Undertaking risky manoeuvres
• Drink or drug use while driving
• Failing to comply with the law

The presentation will explain how, by focusing attention on these five sources of danger, TfL can prioritise the main causes of deaths and serious injuries and take further steps to eradicate the risk of collisions from occurring.

Knowing Daniels’s infamous pedigree in victim blaming, it is difficult not to think that the further steps he is alluding to will be centred on “behaviour change through education”.

This, of course flies in the face of Vision Zero principles, or Safe System thinking as TfL Head of Road Safety Simon Bradbury likes to call it:

From a presentation by Simon Bradbury

So here are the right questions that Leon Daniels needs to ask:

What measures can TfL take when designing, building, operating and managing the roads to reduce the incidence of speeding, carelessness, distraction by operators of motor vehicles?

What measures can TfL take when designing, building, operating and managing the roads to reduce the severity of collisions when human beings make errors?

What can TfL learn when errors by road users cause the death or serious injury of human beings?

Of course users have a responsibility to behave in a civilised manner and enforcement has a role in leading people away from anti-social behaviour, but too many people have been killed because TfL builds road with the assumption of perfection in human behaviour.

As Simon Bradbury says, “a fundamental change in approach” is needed.