Coroner Mary Hassell was not getting the answer she was looking for. The Police expert witness, Simon Gladstone explained that killer Zanah Mohamed was fully aware that more than hundred people were on the pavement at 4:00, many attempting to cross the six lanes of Old Street after a night of clubbing. Driving at 50kmh with the road dog-legging left wasn’t something the Police officer would have done.

The Coroner insisted “Is it therefore “careless” to drive at that speed, when one is aware of the hazards?” The Policeman muffled and cowardly refused to give a resounding “Yes” (i.e. the correct answer). And so Hassell was denied the opportunity to send this case of miscarriage of justice back to the Crown Prosecution Service, who had shamefully refused to progress it.

It was a typical case of not rocking the boat, even more shameful because Gladstone had just retired, so had very little to lose in spelling out the obvious.

The Police covered themselves in more excrement when they even failed to charge the driver for failing to stop, because they missed a procedural deadline. See full report here.

And to complete this abject portrait of institutional failure, the killer was let off from being charged for Contempt of Court (for lying under oath), because the Coroner had forgotten to warn him that he could refuse to answer if he felt he could incriminate himself.

The Inquest was taking place at the fortress of the Old Bailey, where earlier in the week, another attempt to rectify a miscarriage of justice also failed. The private prosecutor was unable to convince twelve jurors that hitting someone perfectly visible is an act of carelessness.

So why is the system broken and why is it important to fix it?

The root cause is the way careless and dangerous driving are defined in the legislation.

According to section 2A of the RTA 1988, a person is to be regarded as driving dangerously if (and only if)—

(a)the way he drives falls far below what would be expected of a competent and careful driver, and

(b)it would be obvious to a competent and careful driver that driving in that way would be dangerous.

Careless is the same as (a) above with “far below” substituted with “below”.

The key point that is not addressed by the justice system is  Who should judge the standard? Who is a competent and careful driver?

It would seem obvious that the judge should be someone who is officially recognised to be a competent and careful driver, according to objective standards. This means that the Police expert witness should be asked to make a statement on objective grounds whether the driving was dangerous or careless. That should be taken as a statement of facts, rather than an opinion.

In practice the judgment is made by a jury that statistically is composed by regular drivers who see themselves as competent and careful according to their own standards. Innumerable studies have shown that people over-rate their abilities in all domains and that driving is particularly rife for over-confidence of own  skills. This is compounded by the very British  “us-and-them” attitude of cataloging people according to accent, transport mode, schooling, etc.

So in effect we have incompetent, biased people making judgments.

The second order consequence of this absurdity is that Prosecutors and Police are extremely shy of charging and prosecuting killers, because of over-sensitivity to failing to obtain convictions.

We have a paradoxical situation where the legal system, rather than raising the standards of people’s behaviour to ensure everyone’s personal safety, is held hostage by the lowest denominator who resist to improving their behaviour.

It is rule by the mob.

In other words the system is broken. And a broken Justice System has deeply troubling social consequences; if people convince themselves that some people are above the law and the State does nothing to rectify the injustices, people will start using personal violence to rectify miscarriages and stop behaving as compliant citizens.

Duncan Dollimore, of the Cycling Defense Fund, said after the failure to convict Purcell, the killer of Michael Mason:

“If failing to see an illuminated cyclist on a well-lit road is not careless driving, and no explanation for that failure is required, that reinforces the arguments Cycling UK has made through our Road Justice Campaign for many years: namely the definition and identification of bad driving offences needs urgent review.”

In the graph below we see the consequences of this broken system. Please note that the headline is written by an innumerate journalist: Less than 20% of the sample received a prison sentence.

In other words, if you want to kill someone who rides a bike, use a car: you have an 80% chance of getting away with it. 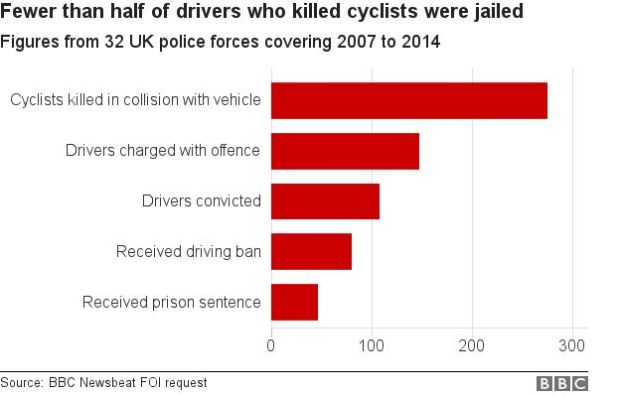 UPDATE: Duncan Dollimore has written an excellent report of the Old Bailey hearing of the Mason case. It highlights the typical behaviour by Police that we have pointed to several times when they decide not to charge killers: they go in extensive and absurd victim blaming. Duncan adds three recommendations:

1.       The current guidance regarding referral of fatal road collision cases to CPS for charging decisions needs to become a requirement, a rule which police forces can’t simply ignore as they did in this case;

3.       The current classification of careless and dangerous driving offences, how driving standards are assessed, and charging standards, are simply not fit for purpose. They must be changed, with the standard of driving required being more objectively determined. Currently, the law requires jurors to consider whether another driver’s standard of driving fell “below”, or “far below” the standard which they believe would be expected of “a careful and competent driver”, whatever that standard might be. One person might well think they’re a careful and competent driver as they overtake a cyclist whilst speeding, leaving a 30 cm gap. I would disagree, so our perspectives on what falls “below the competent and careful driver” test will be irreconcilable. We are asking jurors to apply a standard that few understand, and which is far too subjective.