The myopic vision of creating two types of cycle routes according to who is in charge of building them has created the paradoxical result that the Super Highways, meant for fast cyclists, actually deliver perceived safety to everyone, most importantly for young and old, 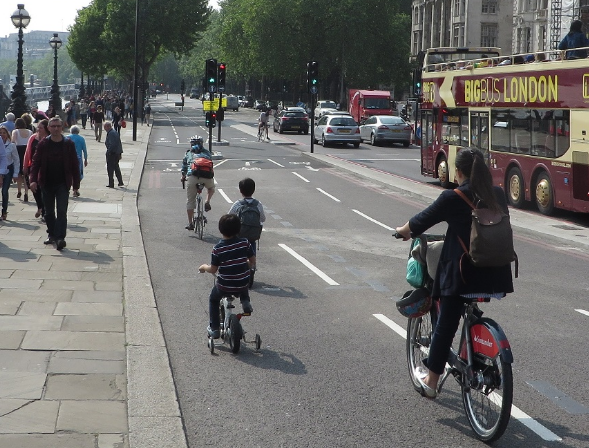 whereas the Quietways, left in the hands of lazy Councils, fail completely in providing a pleasant environment for the “less confident cyclists”.

It is a paradox that the branding guru, now Cycling and Walking Commissioner, Will Norman cannot fail to perceive.

He has already expressed his opinion that the term Cycling Super Highway has become toxic, because (wrongly) associated with fast, anti-social cycling. Many people who are not presently cycling, perceive CSHs as facilities for existing cyclists, not as civilising intervention to make our streets more liveable and more usable by everyone.

Whereas the brand launched by Lucy Saunders, Healthy Streets, is a winning one, (as long as it actually delivers), the dichotomy of Fast/Quiet Cycle Routes should now be discarded.

Of course the problem is not just one of names but of strategy. As Mark Treasure and David Arditti (the most eloquent amongst many others) have pointed out, what people want is a network of safe routes that can take them between A and B efficiently.

So Will Norman, who understands that the value of the brand rests on its ability to deliver what it promises, needs thoroughly to redraft the Cycling Strategy concentrating on creating a network of safe, direct routes. With this new focus, the present oxymorons can be dropped, and a new name for the network be introduced.

My suggestion: the Active London Network.

We elect people to take decisions not to waste our money with exercises such as the 4-week long Public Inquiry over 800m of cycle track in Bloomsbury.

Everyone’s time and money would be better spent in solving some of the issues raised by the experimental phase in the creation of the cycle track. That is exactly why one runs a preliminary phase: to be able to improve the project by observing the behaviour of people using the infrastructure.

The key objection to the scheme has been that traffic has been displaced to other streets in Bloomsbury. That is the problem to solve, not whether to retain the cycle tracks, because they have been an indisputable success. So the whole essence of the Public Enquiry is bogus: it focuses on the viability of something that is obviously successful, rather than focusing efforts in solving some of the “collateral” issues.

When I suggested that Camden Council should adopt the principle that Bloomsbury should not be used by through traffic, someone tweeted:

Bloomsbury is indeed between the City and Euston, but there are four arterial roads that link the two, without having to enter Bloomsbury:

Of course, the Motoring Grid needs to be adopted on a city-wide basis, so that all neighbourhoods can benefit from reduced motor traffic.

We have introduced the concept exactly 3 years ago, and the Dutch have been implementing it for decades. How many yeas before authorities in London understand that it is an essential tool to deliver Healthy Streets?