Three junctions, where people have lost their lives or severely injured, and the wrong lessons have been learned.

This is probably the most dangerous junction for pedestrians in the City of London. It is on TfL’s list of 73 killer junctions and apparently TfL is designing a new layout (we have not seen any plans yet). I have raised the lethality of the junction with the City of London Road Safety team more than two years ago, but they claim it is TfL’s responsibility.

It would have been kept in the back burner for years, if it had not suddenly sprung in the news, following a court decision adjudicating costs on a collision between Robert Hazeldean who crashed into Gemma Brushet while riding his bike.

However, as is usually the case in England, the wrong lessons were learned. Nobody has focused on the junction and people have tittle-tattled on the judge’s decision to ask Hazeldean to pay for Brushet’s cost even if blame was apportioned 50-50.

Even shabbier has been the behaviour of organisations such as British Cycling and London Cycling Campaign which used the opportunity to market their memberships with inclusive 3rd party insurance.

No one has spoken about the junction, the root of the problem.

The key lethal feature of this crossing is that one arm has ALWAYS conflicting motor traffic. That is right: there is no phase when it is safe to cross. 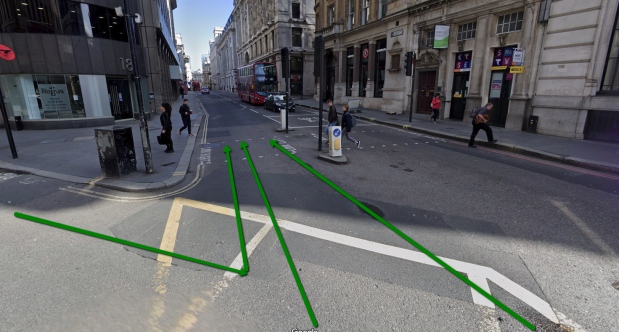 To make things even worse, the Southbound motor traffic is most of the time stationary, thus giving a deceptive clue that it is safe to cross.

Add to this mix the English arrogance that who sits at a wheel (or rides a bike) has always priority over pedestrians and you have a death trap.

Now watch this two minute video, and you scratch your head: how can a civilised country design and refuse to alter something so dangerous and disrespectful to its citizens?

Notice from the beginning: motor traffic stopped at red, but West arm is not safe to cross.

00:35 Watch the speed of the bus – if a pedestrian had been confused and was crossing at that point, the driver would have had no chance to take evasive action -> death with 80% probability (and the pedestrian would have been blamed)

00:55 People crossing are given no clues that southbound traffic has now a green light and are taken aback.

01:05 Eight people squeezed between buses. Why do English people accept being treated with such contempt?

The incident that had everyone fibrillating happened in 2015; in 2017 there was another incident where a pedestrian suffered serious injuries. We are now well in the second half of 2019 and TfL is still designing. They are in contempt of Section 39 of the Road Traffic Act 1988, which compels the relevant Transport Authority to take action when road design has contributed to serious incidents, to prevent similar incidents from happening again.

Our solution is simple: get rid of the traffic light and put a zebra crossing. It should not take two years to do that.

UPDATE 12.08.19 – As Robert points out in the comment below, motor traffic is forbidden from turning left from Cannon Street. So the green arrow from the West is not a legal traffic flow. However if one is crossing King William Street, one may not be aware of this prohibition and one’s attention may be split three ways.