In July 2015, we reported how IslingtonCouncil spent more than half a million pounds of our money received via Transport for London in internal and external “design fees” without actually implementing any section of the Central London Grid, in spite of having accepted £2,000,000 for that purpose. 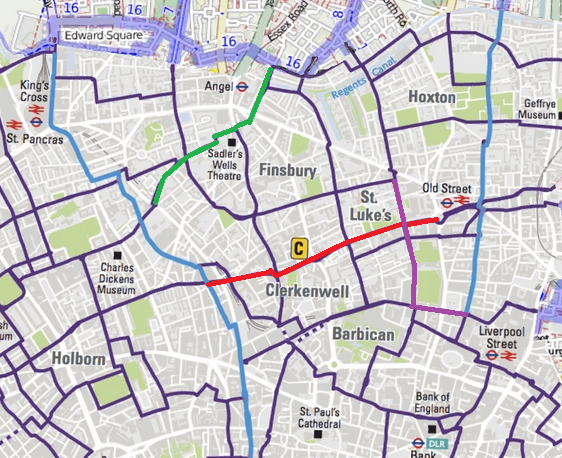 Let’s see how the Council is doing, 19 months after receiving the money:

Route 1 – The most cycled route in Central London – Nothing

To put the above into context, in the mean time

Let’s look at Islington’s consultation. Here are the proposals: 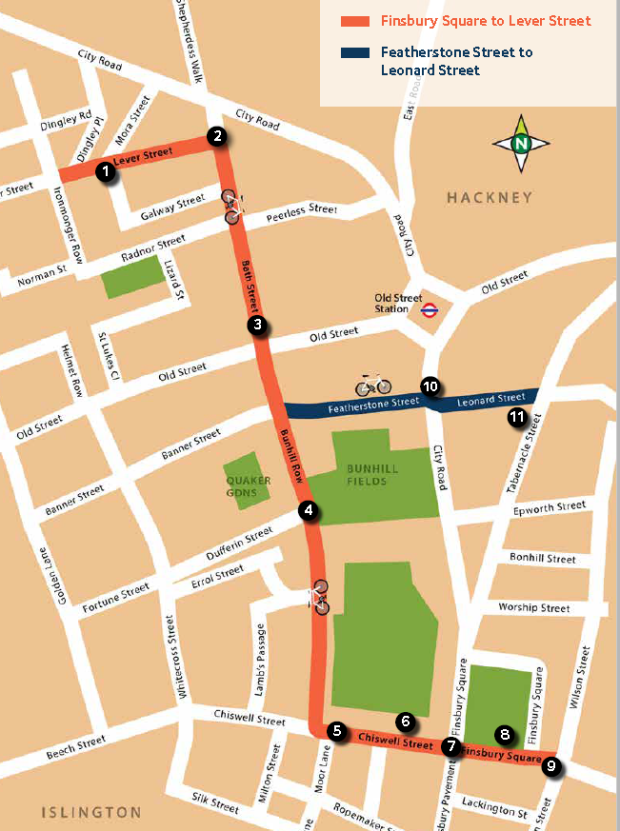 Strangely, there is already an outside with-flow cycle lane on this stretch of Lever Street. 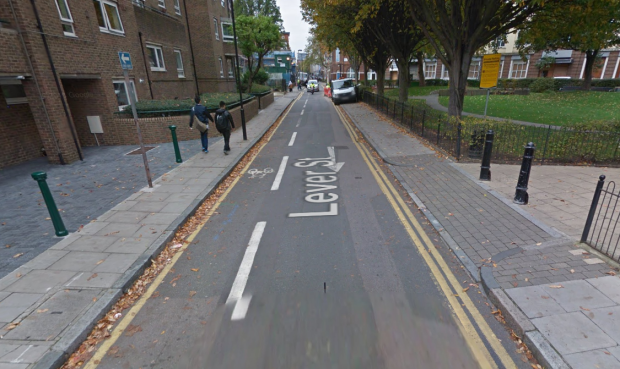 So what they will do is switch the direction of the cycle signs and make most of the line continuous. PAINT JOB. The plans say that there will be no waiting/stopping Mon-Fri 07-19 but how do they plan to enforce it, to prevent this? 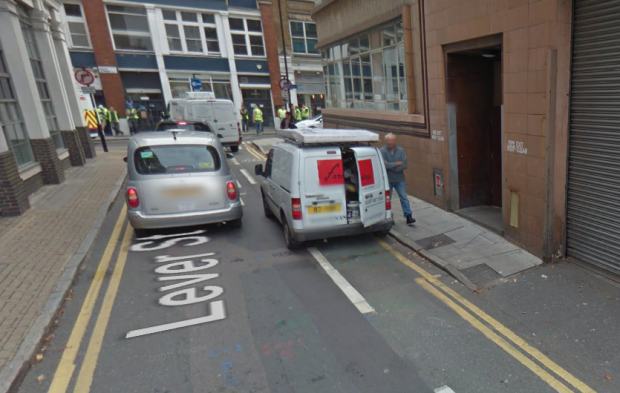 There is already a build-out here. The proposal is to increase its size so that one car park space is replaced by cycle racks.

==> Waste of resources; no improvement in safety

PAINT JOB – Please note there is inconsistency between the drawings and it is not clear whether the contraflow lane will be clearly marked all the way to Chiswell Street. It is clear however that contraflow riders will be forced to ride in the door zone for about 200m. It is not clear why car parking is needed here on both sides of the street:

5 Bunhill Row junction Chiswell Street – Protection for cyclists with
footway build-outs and traffic islands. A signalised junction could be
considered in future, depending on the outcome of a consultation
carried out by the City of London in November 2015.

Another unnecessary build-out proposed; the white area is useful for contraflow cyclists coming from the left intending to turn left. The build-out may be helpful for pedestrians, but if that were the intention, a zebra across the entrance of Bunhill Row would be much more useful. So paradoxically here is a case of paint job needed but not given.

Let’s see why. It all starts from not being able to think of a network: 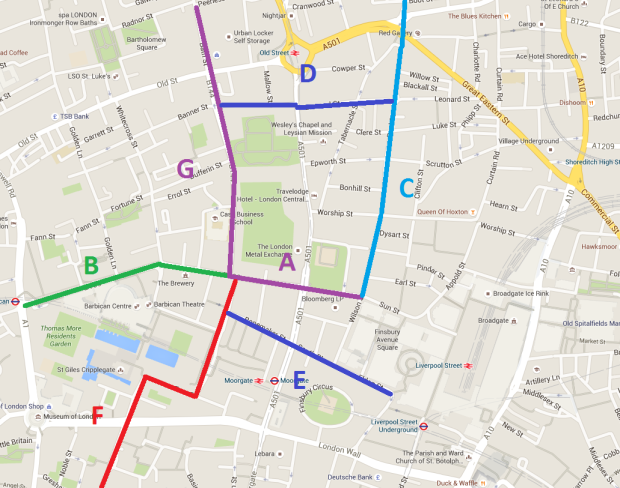 Officers’ present mindset is “build a route”. Users, on the other hand, think: “How do I get from A to B safely and pleasantly?” A route by itself is valueless unless it links with others. These are the key network considerations in this area:

So yes, A is good to have, but it makes very little sense to spend the money there, when it could be spent more wisely elsewhere (for example the Bath Street/Shepherdess Walk Junction, which would link this route to the canal and beyond. That is a TfL responsibility, but what is Islington doing to hasten the process?)

The difficulty of the Bunhill Row – Moor Lane Link should not be a reason to duck it, because that is the main weak link to solve. We are against signalised junction unless necessary. Our proposal for the link is a wide N-S priority (and no-stopping) zone for pedestrians and cyclists that encompasses the entrances of Bunhill Row and Moor Lane.

Let’s look at what is proposed at D

Please note that Featherstone Street is already closed to motor traffic because of multi-year building works, so they are proposing to maintain the status quo. This is what is proposed for crossing City Road: 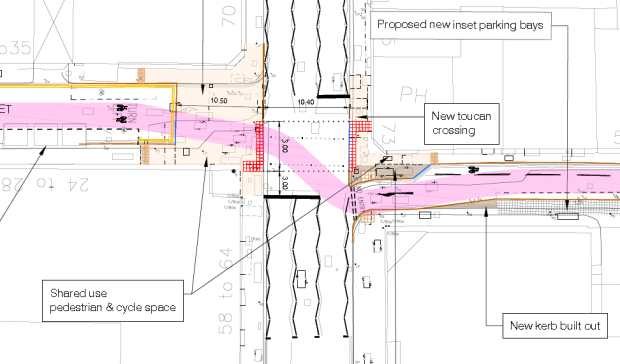 Essentially the Council is proposing to do NOTHING to a very unpleasant and unsafe crossing. First, the mixing of people on foot and on bikes especially on the extremely narrow East pavement is totally unsatisfactory. The solution is not difficult: keep the cycle flow South of the pedestrian flow: all you need to do is move the motor stop lines further away from the junction and remove the jut-out on the NE corner.

Equally important is to alter the phasing of the light from the present inconsiderate 40-sec wait for active travellers.

Leonard Street is presently not fit for purpose: 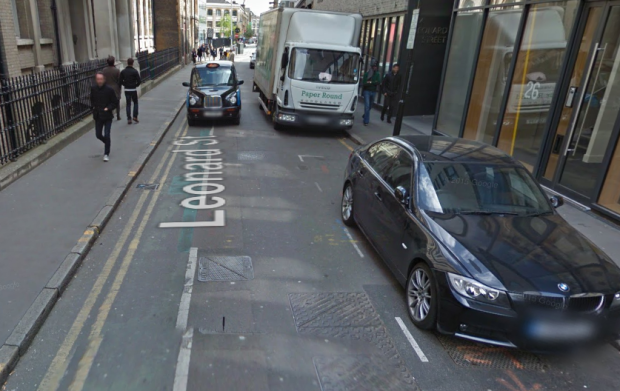 The drawings are not clear if the proposed solution will be satisfactory: 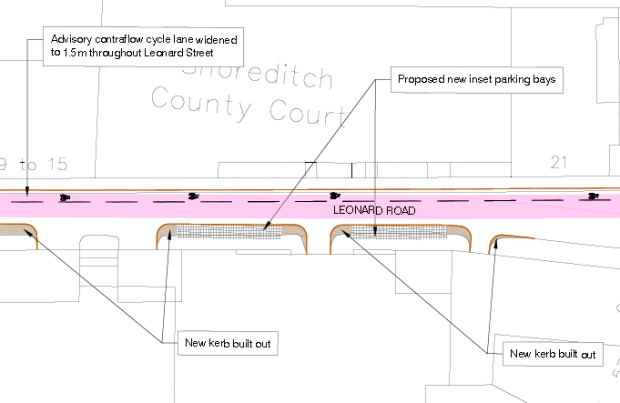 Are the new parking bays taking away space from the pavement?

If yes; why not make the contraflow lane mandatory; if no, what is the point?

We recently had this exchange with Claudia Webbe: 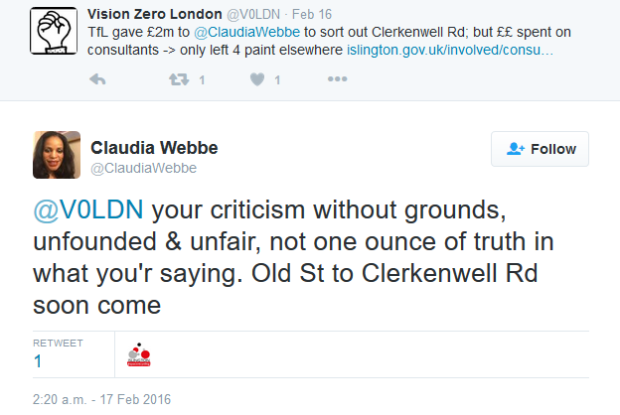 We admit that to say that the proposed scheme is just paint, glosses over certain parts of it, but we hope it is now clear why we think that what is not-paint is either useless or unnecessary at the moment. Worse, the key decisions to improve the weak links of this route to the rest of the network are ignored or ducked.

We are pleased to hear that the plans for the Clerkenwell Boulevard will be released soon; we need to point out however that we have heard this rumour many times before, and the Council has been sitting on them for well over a year now.

An interaction with a pair of impatient Police Officers (see below) motivated me to write this post.

The Highway Code is quite clear where one should ride a bicycle on a road with parked cars:

look well ahead for obstructions in the road, such as drains, pot-holes and parked vehicles so that you do not have to swerve suddenly to avoid them. Leave plenty of room when passing parked vehicles and watch out for doors being opened or pedestrians stepping into your path

But we know that most of the Highway Code rules aimed to protect vulnerable road users are ignored by drivers, Police and traffic engineers.

Here is a road in Westminster: 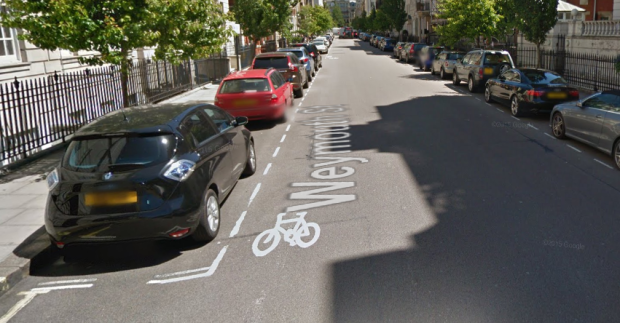 A couple of years ago I raised this issue with Edgar Agrar, a vile toad, at the time Cabinet Member for Transport and the Environment, pointing out that

His response: the signs are there just to alert drivers of the presence of cyclists; a response so idiotic that he could only have copied it from the king of bullshit, Boris Johnson, whose antics cost the lives of at least six people on blue paint.

BTW, in the world capital of bullshit, Argar has been duly rewarded with a seat in the House of Commons, to add fodder to that den of idiots, also called Tory back-benches.

However, even the handful of enlightened engineers probably fail to understand the subtleties of safe road positioning. 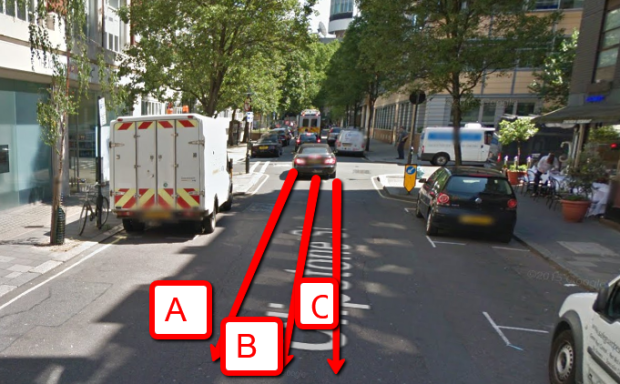 In the picture above, A is the door zone; to be avoided. However, B is also unsafe, because it leaves a gap just wide enough for a car to squeeze through; therefore to avoid close passes, one needs to ride at C, i.e. in the middle of the road.

The problem of course is that to the driver behind you it looks like you are being intentionally  obstructive; well, tough, if she honks, there is only one way to respond: 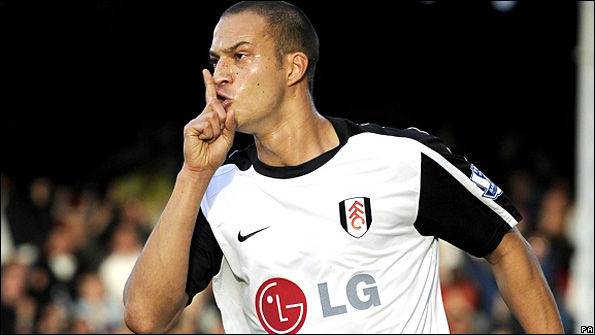 This is an unwholesome way to design streets and makes an unpleasant environment to ride bicycles; which is why most people don’t and why the sub-standard proposals for the Central London Cycling Grid are such a disappointment.

Vision Zero means designing unnecessary conflict out of our roads. Here are the key concepts:

Just a few metres ahead the road narrows: 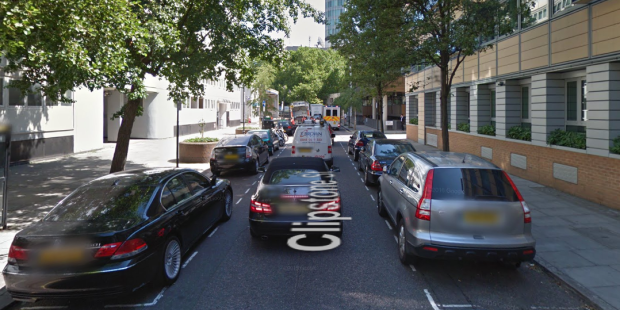 Here riding in the middle of the lane does not generate hostility, because it is obvious that there is no space to overtake. Too many roads in London are the wrong width: they encourage either close passes or hostility.

On Friday afternoon, as I was riding on Channel C in the wider section of the street, I noticed blue lights coming from a Police van, driving behind me. I found a gap in the parked cars and let it pass; except that the Officers (incidentally of British Transport Police) had no urgent call: they just wanted to tell me off for slowing their progress.

What I fail to understand is why people are in such a hurry to breathe the fumes of the car stopped at the next set of lights; but after all, given a normal distribution of intelligence, half of the people are below average. The issue however is that street engineers have to acknowledge that most people when enclosed in metal boxes become bestial, and this should not endanger or inconvenience the rest of us.

One of the most important things that needs to happen in London is the establishment of the Motoring Grid. The Police Van shouldn’t have been on that road in the first place. They were just rat running. Rather than taking the red route, they should have been on the Blue Route, because they had no business to fulfil in Fitzrovia. 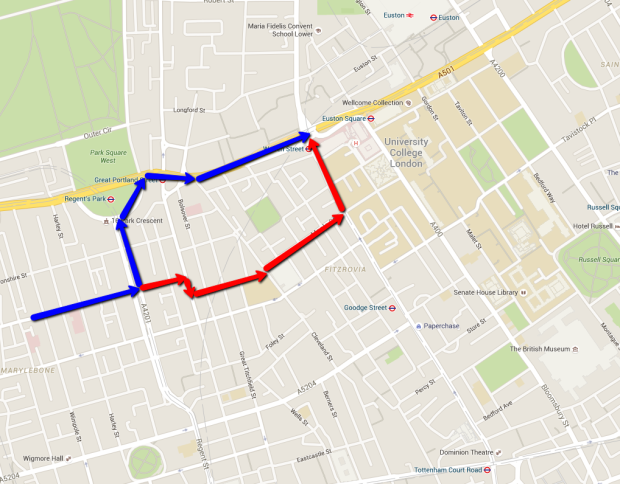 Appendix 1 – After having tweeted the incident, I received a call from a BTP officer; we had a chat  which he followed up by writing the following:

I have identified the officers who were driving the vehicle that had an interaction with you today. I have given the driver an appreciation of the challenges faced by Cyclists that use London’s congested roads and their vulnerabilities.

We need to credit the willingness of the police to engage with people unhappy with their behaviour; however it seems more an exercise in PR than actually admitting that an abuse of power had taken place, symptomatic of an institutional culture which is deeply unsympathetic towards vulnerable road users.

Appendix 2 – Some people have asked whether the BTP have jurisdiction on public highways. They used to be confined to police the railways, but the Terrorism Act has widened their remit … to tackle Lycra Terror.

We did not receive an enthusiastic response, but it seems that concerted campaigns from different fronts are having an effect on TfL’s culture and we are seeing the first results.

Number Two of the 14 Points (Subscription to CIRAS by Bus Sub Contractors) was adopted at the beginning of 2016.

Yesterday TfL announced a substantial set of new policies with Leon Daniels stating “We will not rest until we get the number of people killed and seriously injured down to ZERO” (video: 01:50).

Tom Kearney dissects and comments on the proposals here. He makes the key point  that

TfL’s announced danger reduction actions are measurable.  Whether or not TfL’s proposed programme can be called “world leading” will depend on how—or if—these actions are actually executed. Sound bites, glossy reports and press releases don’t make our streets safer. “Putting Active Travel at the core of Transport” and “Learning from Mistakes” do.

To highlight how much TfL has to change, here is what the residents of North Greenwich say, in a petition launched after the preventable death of a woman by a TfL bus

Peninsula residents have raised the everyday hazards and risks to TfL, councillors, the MP, the GLA and the developers. We have told them about the regular near miss incidents involving buses hurtling through and confused drivers in the wrong lane trying to get to the O2 or Millennium and Peninsula Retail Parks. They say TfL is in charge but TfL refuse to listen or even talk to local people. 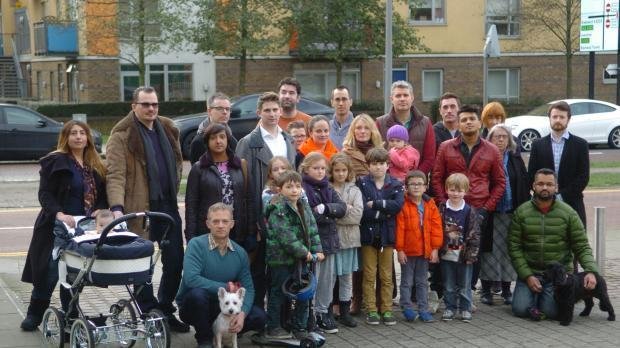 That is why we remain of the opinion that changing TfL is a Herculean task that only a Mayor fully and enthusiastically committed to Vision Zero can accomplish in a speedily fashion.